Bootes-2 is a robotic observatory in La Mayora, Province of Málaga, Andalucía. It is in operation since 2002. The observatory hosts a single dome and a wide set of supportive devices. The main instrument of the observatory is a 60cm Rithchey-Chretien telescope with an EMCCD Andor iXon-889+ 1024×1024 pixels on-chip electron multiplying CCD. The other scientific instrument present on the site is an high resolution all-sky CCD camera, similar to the one installed at BOOTES-1.

The observatory is located in the experimental farm 50km east of Málaga. The distance of 240 km separates it from its sister observatory BOOTES-1, allowing simultaneous observations distinguish nearby object via parallax up to the distance of 1 AU.

Primary objective of the observatory is to provide simultaneous and follow-up optical observations of high-energy transient cosmic phenomena, such as Gamma-Ray bursts, Soft gamma repeaters, Supernova and similar. Using its wide-field capabilities, also fireballs entering the atmosphere are regularly detected. Further objective is a study of variable stars, active galaxies or nearby minor planets. 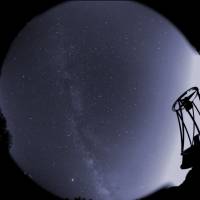 Since 2004, the observatory has been equipped with an high resolution all sky camera. In particular, this camera consists of a 4096×4096 front illuminated CCD chip and a modified 16mm fisheye lens (design is patented). The instrument is capable of recording the entire night sky once per minute with a spatial resolution of 2 arcmin/pixel. With an instrumental cycle of 40s exposure & 20s readout, the system reaches an unfiltered limiting magnitude of ~10-11.

The images are on-line processed to get observing conditions information (which could be fed into the telescope scheduler). Every image is then compressed and archived. Fireballs and stellar optical transients are being searched off-line in the archive.