Because of an importance to protect the astronomical equipment against rain, masurement of the cloud cover is an important part of a decision scheme of an independent robotic observatory. It allows the system to detect the presence of a cloud cover, and up to some extent, supplement the information of observing conditions when the clouds are absent.

Of course, this principle works only in nighttime. During the day, Sun provides additional source of radiation and although the signal still can be used, it's interpretation is not straightforward. 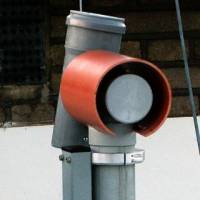 Mrakoměr [mrakomɲer] is an Open Hardware project. After two prototypes, there are two (very similar) versions of the production devices. As of January 2009, there are 3 units known to be under operation. Furthermore, the second prototype - MM-2, is still operational as well.

In the simplest way, this phenomenon was used in the first prototype of Mrakoměr - MM-1. It uses the Peltier cell inserted freely between the earth and the sky. The current generated by the cell is nonzero, and differs significantly when the clouds are present or absent. 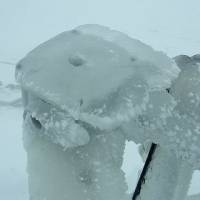 Further variants of the device use a less straightforward, but equally effective way of detecting the clouds - measuring the effective temperature of the sky with a solid-state thermopile infrared sensor. Second prototype - MM-2 is a movable device, able to provide effective temperatures at various inclinations. The production devices - MM-3 and MM-4, are fixed for simplicity, providing only the temperature in the zenith. MM-4 has, in comparison to MM-3 improved circuitry to provide fault-tolerancy against failure of the sensor, crash of the computer, and burning from lightning.

Software support for Mrakoměr is natively in RTS-2 as a standalone device driver rts2-sensord-mrakomer and provides “BAD_WEATHER” signal in case that the readings suggest an overcast situation. 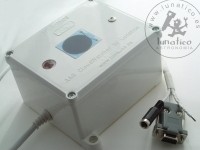 There is a commercial device, designed by António Alberto Peres Gomes and distributed by Lunatico, providing cloud sensing (and also light and rain sensing) in a similar way.

and Cloud sensor for further documentation abou the device itself.