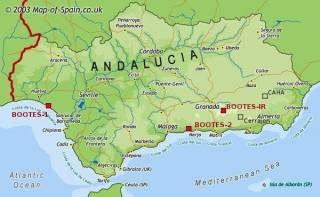 Bootes-1 is a robotic observatory in El Arenosillo, Province of Huelva, Andalucia. It is in operation since 1997. The observatory hosts two domes with robotic telescopes and a wide set of supportive devices. The largest instrument at the site is currently BOOTES-1B, a 30 cm Schmidt-Cassegrain equipped with an EMCCD Andor iXon-889 512x512pixels on-chip electron multiplying CCD. Further, there is BOOTES-1A, a very wide (5-degrees) field of view, 140mm effective diameter telescope, with a conventional large-format CCD. The third scientific instrument present on the site is an high resolution all-sky CCD camera, similar to the one installed at BOOTES-2.

The observatory is located in the pine forest near the uninhabited coastline 40km east of Huelva. The distance of 240 km separates it from its sister observatory BOOTES-2, allowing simultaneous observations distinguish nearby object via parallax up to the distance of 1 AU.

Primary objective of the observatory is to provide simultaneous and follow-up optical observations of high-energy transient cosmic phenomena, such as Gamma-Ray bursts, Soft gamma repeaters, Supernova and similar. Using its wide-field capabilities, also fireballs entering the atmosphere are regularly detected. Further objective is a study of variable stars, active galaxies or nearby minor planets.

BOOTES was founded in 1998, with a single dome and a 20 cm Meade LX200 mount, piggybacked with two wide-field lenses with the idea to follow BATSE alerts and to perform automated scans of the sky. These old GRB alerts had large uncertrainities, so only wide-field observation was considered important. Two SBIG ST-8 cameras with Nikkor 50 mm 1:1.2 lenses were used. They had a field of view 16 x 11 degrees, limiting magnitude ~14.0, and were mounted perpendicularly to each other. Obtained images were analyzed with a specialised pipeline designed for an accelerator board Photomate 20 with two signal processors Texas Instruments TMS320C40 (Petr Páta et al., 2001). 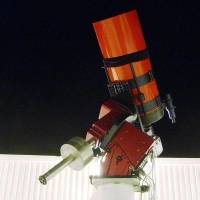 BOOTES-1B is a 30 cm Meade Schmidt-Cassegrain telescope on a fast slewing Paramount-ME mount, equipped with a FLI CM-8 1536×1024 pixel (Kodak KAF1602) CCD camera. It's primary objective is follow-up of satellite GRB alerts. It can interrupt the ongoing observation, slew and start acquiring images of the proposed GRB location with a typical delay of 30s after the alert reception. Typical limiting magnitude of the earliest 10-second unfiltered exposures is 15. Later, with longer exposures, a limiting magnitude of about 18 can be achieved.

The telescope has been in this setup since September 27, 2006. After the mount failure, the telescope was for certain time relocated to BOOTES-2 for better accessibility from Granada. On March 28, 2008 it has been moved back to its original dome in Arenosillo. There have been two major downtimes: The first caused by the disastrous mount failure which happened at November 12, 2006 and disabled the telescope for 7 months. The second ocurred between July 10, 2008 and August 28, 2008 (1.5 months) due to a dome failure. 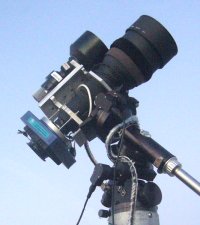 The new incarnation of BOOTES-1A, still under comissioning, has been installed during July 2008. It is a small wide-field fast-slewing telescope. The main lens is a Nikkor 400mm 1:2.8 telephoto lens coupled with a large format CCD camera Apogee Alta 16U. The effective diameter of the lens is 140mm. We use Losmandy G11 with Gemini to remotely control the mount.

To achieve optimum performance, we made several improvements to the main optical system. It has an heated frontal optical window, which protects the precious optical instrument during the daily service. Further, the CCD needed a specially designed collimating tool to be correctly placed in respect to the lenses optical axis. Nikon lens mount did not prove to be rigid enough to support ~3kg camera and was prone to bending, resulting in image quality drop.

Piggybacked atop the large lens, there is a small 1536×1024 CCD camera FLI MX8 with Nikkor 18mm/2.8 wide-field lens, providing even larger field of view - 40°x26°, similar to the size of the earliest GLAST-Fermi/GBM burst localizations. 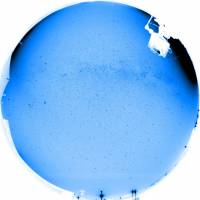 The CCD all-sky camera system, with one camera at each station, provides information on observing conditions, fireball events, and, in the ultimate hoped case, a simultaneous GRB optical detection.

The camera at BOOTES-1, ASM1 is the first of the cameras purchased. It uses Apogee-AP16 CCD camera (with a PCI interface) and a 10.5 mm fisheye lens. With this setup, the image circle is 3136 pixels across, having 180 arcseconds per pixel at zenith. All images are real-time astrometrically and photometrically processed to provide information about photometric quality of the sky and to be more easily searched in the future. The camera takes one 36 s exposure every minute. 24 s are spent reading out the CCD. ASM1 provides 1.1GB of data per hour, which sums to ~3.2TB per year. Using compression and deletion of images taken at indecent conditions we expect to get to about 800GB per year. Until recently, all the images were deleted but one per hour, forming an hourly sampled archive of the night sky since 2002.

As an independent robotic observatory, BOOTES has various devices to sense the weather. Currently, a multi level decision model in order to decide whether to observe or not. The following detectors are used during the decision whether the observation is possible or not.